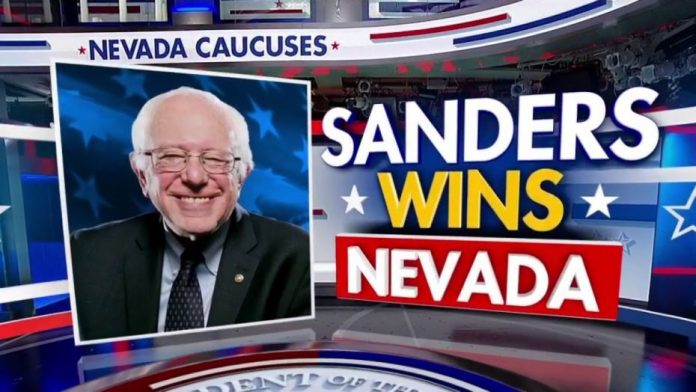 Senator Bernie Sanders won the caucuses in Nevada, solidifying his frontrunner status in the race for the Democratic nomination. “We’ve brought together a multigenerational, multiracial coalition that is not only going to win Nevada, but it’s also going to sweep this country,” Sanders told supporters in San Antonio, Texas, after the Associated Press and several networks projected his win. With almost half of precincts officially reported, Sanders held a large lead on Saturday night. At this stage of results, the former vice-president Joe Biden appeared to be in second place, with the former South Bend, Indiana, Mayor Pete Buttigieg and Senator Elizabeth Warren trailing behind. The Nevada caucuses come at a critical moment in the Democratic primary, a week before the South Carolina race and just before Super Tuesday, in March, when 14 states will vote. In a state that is nearly 30% Latino, 10% black and has a rapidly growing Asian American community, the Nevada results were a compelling sign of Sanders’ strength in diverse states that more closely reflect the demographics of the Democratic party. The victory for the self-proclaimed democratic socialist follows strong results in Iowa and New Hampshire this month and his momentum comes as the support of more centrist Democratic voters remains divided among his rivals. With none of those moderate Democrats indicating they will drop out anytime soon, Sanders has a solid lead in the race to win the nomination and take on President Donald Trump.

Nevada is the third contest in the Democratic primary race. The first two primary states, Iowa and New Hampshire, which are 90% white, also delivered strong results for Pete Buttigieg. But the former mayor of South Bend, Indiana, appeared to have been unable to capture strong support among Nevada’s diverse electorate. Buttigieg, who took the stage in Vegas before his standing in the Nevada results was clear, directly targeted Sanders in his speech, criticizing the “inflexible, ideological revolution” of the Vermont senator and urging Democrats not to “rush to nominate” him. Nevada’s “first-in-the-west” caucuses were also a major test for the campaign of the former Vice President Biden, who was a frontrunner in polls last year but performed poorly in the first two state contests. Biden gave a triumphant speech in Vegas before the results were finalized, and his campaign manager said he appeared to be in second place. “The press is ready to declare people dead quickly. We’re alive. We’re coming back,” Biden said to cheers. “We’re going to win in South Carolina, and then Super Tuesday.”

Senator Amy Klobuchar, another midwestern candidate vying for moderates, had earned an unexpected third-place win in New Hampshire but also polled poorly with voters of color. With 43% of precincts reporting, Klobuchar appeared to be near the bottom in Nevada. Senator Elizabeth Warren was pushing for a surge in Nevada after her widely celebrated performance at the debate days earlier in Las Vegas. The Massachusetts senator announced that she had raised $14 million in the last 10 days, double the amount her campaign had set out as a goal ahead of the caucuses. She came in fourth in Nevada, making a path to the nomination increasingly difficult. At a Saturday night rally in Seattle, Warren congratulated Sanders and thanked Nevada voters “for keeping me in the fight”. She emphasized her recent fundraising surge, adding, “We have a lot of states to go, and right now I can feel the momentum.” Former New York mayor Mike Bloomberg was not on the ballot in Nevada due to his late entrance into the race, and the billionaire’s campaign has faced intense scrutiny this week after a particularly embarrassing first debate performance in Vegas.

Democratic Presidential candidate Joe Biden has opened up a 13-point lead over President Donald Trump, the widest margin this year, according to...
Read more
2020 Presidential Election

Hundreds of officials who worked for former Republican President George W. Bush as a July 1 are set to endorse Democratic Presidential...
Read more

Iran has issued an arrest warrant for US President Donald Trump over the drone strike that killed a top Iranian general in...
Read more

The House of Representatives voted nearly along party lines on June 28 to grant statehood to Washington, D.C., the first time a...
Read more
Load more

“ Hundreds of officials who worked for former Re

“Iran has issued an arrest warrant for US Presid

Amid Increasing Political Tensions With US, China Boosts Relationship with Russia in Recent Summit Meeting

China and Russia have signed more than US$20 billion of deals to boost economic ties in areas such as technology and energy...
Read more

My Response to Neo-Con Propaganda Video

here is the propaganda video: https://www.youtube.com/watch?v=WJIHCczsbJo Neo-Con propaganda; The US lied about Nuclear weapons and the invasion was a war crime. The US government killed...
Read more

Hundreds of officials who worked for former Republican President George W. Bush as a July 1 are set to endorse Democratic Presidential...
Read more

Iran has issued an arrest warrant for US President Donald Trump over the drone strike that killed a top Iranian general in...
Read more