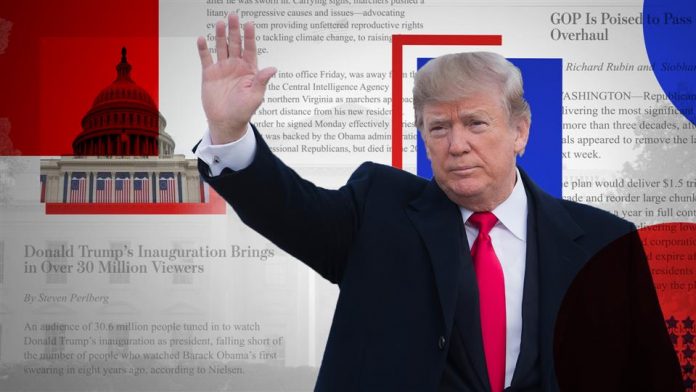 This video by PressTV presents a review of President Donald Trump’s first full year in office. One year has passed since Donald Trump has been elected US President. Since then, the world has seen a US President unlike any other. One that is aggressive, impulsive, uninterested in politics, and egotistical. Despite coming into office with a grand series of promises to change American politics for the better, the case can be made that the policies pursued by the Trump Administration have changed American politics for the worst. Trump has thus far failed to realize any of his campaign promises, fanned the conspiracy flames regarding his relationship with Russia, contradicted and insulted his staff, and made enemies of allies throughout the world. Additionally, President Trump has attacked the governmental institutions he oversees, threatened to use his powers to ruin the lives of his political opponents, waged war against members of his own party, and engaged in race-baiting, sexism, ableism, and religious bigotry when pursuing his destructive agenda.

One such area in which President Donald Trump left his mark during his first year was his immigration executive order banning (mostly Shi’a Muslim) immigrants, travelers, and refugees from seven majority-Muslim countries (Syria, Iran, Iraq, Yemen, Sudan, Somalia, and Libya). This action ignited a firestorm of protest and revealed the bigoted, white supremacist agenda underlying the Trump Administration’s policies. President Trump also rattled the nuclear-saber more than any other President in US history with his incitement of North Korea, going as far to threaten the North Korean government with “fire and fury.” Many politicians on both sides of the aisle worry that Trump has misused the moral authority surrounding the office of the Presidency through such statements and actions.

President Donald Trump claimed during his first year in office that he has the unilateral authority to order the Justice Department to open or close investigations into his political opponents. Such rhetoric threatens to set a negative precedent in future Administrations that goes directly against the principles of separation of power spelled out in the US Constitution. President Trump’s outreach to autocratic regimes such as Saudi Arabia and Israel further characterized his first year in office. By backing the Saudi Crown Prince Mohammad bin Salman, President Trump has given the green light for Saudi Arabia to escalate its three-year-long intervention in Yemen, which has resulted in the deaths of thousands of innocent people and has encouraged hatred towards Shi’a Muslims throughout the world.  Additionally, President Trump’s choice to recognize Jerusalem (“al-Quds” in Arabic) as the capital of Israel has encouraged the Israeli regime to expand its crusade against the Palestinian people.

President Donald Trump also left a negative mark within the realm of international politics and has adopted a firm, neoconservative view regarding the role of the US in the world. President Trump has repeatedly denounced the Iranian nuclear deal, calling it the “worst deal ever negotiated” despite the fact that it was upheld by numerous organizations, most notably the United Nations and International Atomic Energy Agency (IAEA). Additionally, President Trump has proposed a hardliner stance towards Iran, calling it a “terrorist nation” and calling for US military action to remove the current Iranian government from power.  These actions on the part of the President have led to many European leaders such as German Chancellor Angela Merkel and French President Emmanuel Macron to rethink their reliance on US political and diplomatic leadership on the world stage.

In terms of domestic policy, President Donald Trump generally has had an abysmal first year in office. Trump failed to follow through on repealing The Patient Protection Affordable Care Act (“Obamacare”) despite the fact that his party controls both houses of Congress, and has relied on Executive Orders more often than any other first-year President in US history. The only true legislative achievements of President Trump’s first year in office are his nomination of Neil Gorsuch to the Supreme Court and the passage of the Tax Cuts and Jobs Act of 2017. Many critics argue that the presence of Neil Gorsuch on the Supreme Court will move the Judicial branch far to the right and have a profound (and what many view as a negative) impact on decisions such as drug policy, women’s rights, abortion, gay rights, and electoral reform. Additionally, nearly all economic organizations point out that the Tax Cuts and Jobs Act is a clear giveaway to the wealthiest 1% and only serve to further the widening income gap between the wealthy and the poor.

Here is the link to the video:

Democratic presidential candidate Joe Biden urged Senate Republicans on September 21 not to vote on any candidate nominated to the US Supreme...
Read more
American Law

US Median Household Income hit a record high in 2019, and the poverty rate fell, according to a government survey released on...
Read more

“The Allegory of the Cave” Textual Analysis

Throughout human history, philosophers have attempted to determine the best way to promote intellectual freedom and allow individuals to break free...
Read more

Here are the main events that occurred in Politics this week: 1. Justice Department Threatens To Cut Funding...
Read more

President Donald Trump declined on September 23 to commit to a peaceful transfer of power if he loses the Presidential election to...
Read more

Democratic presidential candidate Joe Biden urged Senate Republicans on September 21 not to vote on any candidate nominated to the US Supreme...
Read more
Load more

#TRUMPpolicy on the #fiscal issues is pro-job crea

Killing Petroleum, From the Most Unlikely Sources;Water

Everyone is shocked oil has gone down in the last few years when it was close to $4 a gallon now under $3. Why...
Read more

Here are the main events that occurred in Politics this week: 1. US, UK, and France Bomb Syria Over "Suspected" Chemical Weapons Attack The US and...
Read more

“The Allegory of the Cave” Textual Analysis

Throughout human history, philosophers have attempted to determine the best way to promote intellectual freedom and allow individuals to break free...
Read more

Here are the main events that occurred in Politics this week: 1. Justice Department Threatens To Cut Funding...
Read more

President Donald Trump declined on September 23 to commit to a peaceful transfer of power if he loses the Presidential election to...
Read more