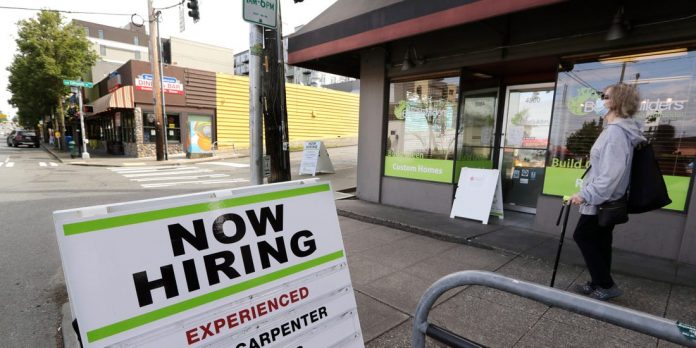 The US economy added a record 4.8 million jobs in June, according to federal data released on July 2, but a surge in new Coronavirus infections and a spate of new closings threatens the nascent recovery. Two key federal measurements showed the precarious place the economy finds itself in three and a half months into the pandemic as the country struggles to hire back the more than 20 million workers who lost their jobs in March and April. While companies have continued to reopen, a large number of Americans are finding their jobs are no longer available. The unemployment rate in June was 11.1 percent, the Bureau of Labor Statistics said, down from a peak of 14.7 percent in April but still far above the 3.5 percent level notched in February. And another 1.4 million Americans applied for unemployment insurance for the first time last week and more than 19 million people are still receiving unemployment benefits, stubbornly high levels that show how many people are struggling to find or keep work. The Congressional Budget Office said the Coronavirus pandemic gave such a shock to the labor market that it would not fully recover for more than 10 years.

President Donald Trump touted the jobs that were added at a news conference called shortly after they were released, saying they were a sign that “America’s economy is now roaring back to life like nobody has ever seen before.” “All of this incredible news is the result of historic actions my administration has taken,” President Trump said. But his top aides acknowledged there was still a long way to go. “There is still a lot of hardship, and a lot of heartbreak, in these numbers,” National Economic Council Director Larry Kudlow said. “I think we have a lot more work to do.” The stock market initially rose on the news, with the Dow Jones industrial average rising 400 points, or 1.5 percent, before retreating. It closed up 92 points on the day.

Economists called the 4.8 million jobs added encouraging, saying they were a sign that the massive financial incentives that Congress passed appeared to have succeeded at stanching even greater job loss. But the good news came with a couple of significant asterisks: It was gathered the week of June 12, when the country was reporting less than 25,000 new cases a day, not the current average of more than 40,000 that has sent new closures and shutdowns cascading across states and counties. “The pandemic pushed us into a very deep economic hole,” said Mark Zandi, chief economist at Moody’s Analytics. “We can certainly fall back.” The more than 14.7 million people who are still out of work have left the country with an unemployment rate higher than any point during the Great Recession. The unemployment insurance data, based on statewide claims that are separate from the survey that informs the jobs report, paints an even less sanguine picture: Last week was the 15th straight where unemployment claims exceeded 1 million, a sign that the economic recovery has not taken hold for many Americans.

The data bring into sharper focus the turmoil facing the US economy after many businesses sent workers home in March during the beginning of the spike in deaths caused by the virus. Many companies began rehiring in May and June, but there are signs that some workers are getting laid off for the second time in just a few months. Many Americans remain employed but are working drastically reduced schedules, more than 9 million workers reported working part-time because of economic reasons, more than double the level in February before the pandemic. Still, a participation rate of 61.5 percent in June, slightly up from April and May but nearly a percentage point below February, indicates that others may be leaving the labor force altogether, an echo of the deep economic turbulence in the Great Recession. Economists said there are other reasons to be concerned as incentives for businesses to retain employees and some benefits that have allowed people out of work to stay afloat financially are winding down without more federal action.

Federal and state officials struggled to time their reopening efforts in April and May, in some cases ignoring warnings from public health officials. Now, cases in some of the states that reopened the fastest, or with the loosest restrictions, are seeing the biggest spikes, such as Florida, Arizona, and South Carolina. In recent days, Texas shut down all bars just weeks after they had reopened. California announced the closure of bars and indoor dining in 19 counties, more than 70 percent of the state. And at least nine other states have slowed or reversed their reopenings. Restaurant bookings have begun to sink in hard-hit states such as Florida, Texas, and Arizona. Job postings on the Indeed website, though up from a low of 39 percent, are still down 24 percent from last year.

The Trump Administration unilaterally imposed sweeping Sanctions on Iran's financial sector in a move that critics say could have unintended consequences, including...
Read more
Elections

DHS: White Supremacists ‘The Most Persistent and Lethal Threat’ Within the US

White Supremacists "remain the most persistent and lethal threat in the homeland," the Department of Homeland Security concluded in its inaugural threat assessment...
Read more
American Economics

Nonfarm payrolls rose by a lower than expected 661,000 in September, and the unemployment rate was 7.9%, the Labor Department said on...
Read more

The US Supreme Court on October 13 turned away South Carolina’s bid to cut off public funding to Planned Parenthood, the latest...
Read more

The US Supreme Court on October 13 turned away South Carolina’s bid to cut off public funding to Planned Parenthood, the latest...
Read more